We may be starting the year fresh; bursting with new ideas and ready to launch new products, but some old favourites we just couldn’t say goodbye to. That’s why, for 2021, we’re bringing back Squrbo.

That’s right, market-favourite Squrbo range is making its comeback, and we guarantee you’ll love it even more than the first-time round. Its compact and powerful design made it a hit with our customers, and despite coming off sale nearly twelve years ago, we couldn’t let the legacy of Squrbo fade into a distant memory. Not sure what we’re talking about? Let’s take a trip down memory lane…

Back in 1987, we launched our off-the-shelf extract fan range, Squrbo. Short for ‘square turbo fan’, its compact design was ideal for anyone working on smaller projects who needed power but didn’t want to compromise on size. Squrbo quickly became an industry favourite and UK market leader as it firmly established itself the ideal product to use in stock rooms, kitchenettes, WCs and copying rooms.

As word spread on our hugely reliable and convenient product, we saw our Squrbo range installed in major projects across Britain. Most famously, Squrbo was the preferred product for supermarket chain, ASDA, with multiple units installed in every new store built between 2008 and 2015. Nuaire also secured Squrbo installations at prestigious universities throughout the UK, including Liverpool John Moores University.

As the demand for Squrbo continued, we started to adapt its original design to fit with the changing industry. In 1994, the Smart Squrbo was launched, followed by the EcoSmart in 1998. Both brought together power and energy efficiency, and once more, the Squrbo range grew in popularity - thriving for years after its launch.

But like all good things, it had to come to an end. Due to regulation changes made by the Energy-related Product Directive (ErP) in 2009, new restrictions were introduced, and the manufacturing of electrical products began to change. This meant that Squrbo had to officially retire and come off the market.

Whilst we were hugely disappointed, our innovative development team continued inventing and manufacturing highly successful and efficient fan products. Our Aire-Volve led the way in acoustic extract ventilation; ideal for restricted applications with strict noise requirements, and in more recent years, our high-performance DAVE commercial extract and supply fan range established itself as a major player within the market. However, there was always just that one product missing from our Nuaire fan collection, and that’s why we’ve decided to hit ‘restart’ on our old friend, Squrbo.

The cleverly named 2021 edition, Squrbo 2 launched this January and promises customers a service just as it did before, but better. This favourite, off-the-shelf extract fan is designed -still- with smaller projects in mind and is perfect for anyone who needs a powerful system but finds themselves stuck for space.

The launch of Squrbo 2 means that Nuaire now has its most comprehensive catalogue of both single and twin extract fans on the market, truly something to suit any solution.

If you’ve used Squrbo in the past, you’ll know just how easy it is to install and the incredible power it generates for such a smaller product. If you’re new to the Squrbo-game, you’ll be the biggest fan of this little fan in no time. 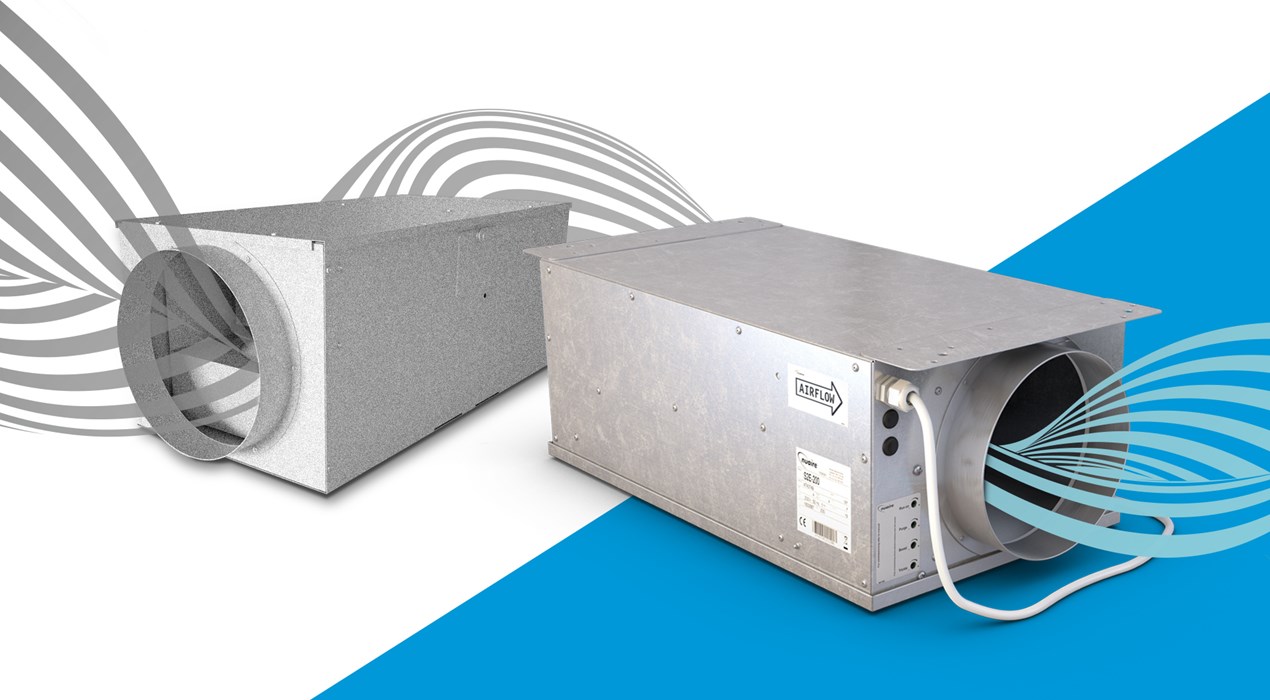