In the aftermath of the Grenfell Tower fire disaster, the construction industry was forced to reflect on its failures. Fire safety practices were scrutinised and cost-cutting methods lambasted in a bid to understand and learn from the catalogue of errors that contributed to the tragic death of 72 people on 14th June 2017.

Over 12 months on, the issue of fire safety is now front and centre for our industry. Much has been learnt from the Grenfell Tower disaster, but the families and wider community in the North Kensington neighbourhood remain broken.

There are no opportunities to ‘do better next time’ for those whose family members were lost in the fire, injured or made homeless as a result. This is a grieving community in need of support, and, like thousands of other organisations across the construction sector, the team at Nuaire has stood by feeling helpless yet wanting to help.

So when the DIY SOS team called out to building companies and suppliers to support the surviving residents and wider community, we seized the opportunity with both hands.

In its most ambitious project to-date, DIY SOS: Grenfell sees the full construction of two new buildings for the local community, built from the ground up in just nine weeks. Nestled underneath the Westway on the A40 (the main route into and out of west London), a two-story community centre and state-of-the-art boxing gym have been created. 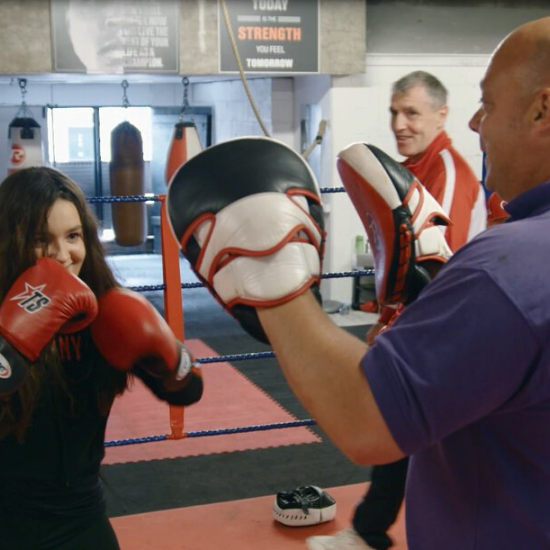 Last night's episode told the story of the building of a new home for the displaced Dale Youth Boxing Club. Housed in the ground floor of the Grenfell Tower since 1999, the 60 year old club has nurtured over 200 notable amateur boxing champions and supported thousands of young people. Its famed alumni include Olympic gold medal winner James DeGale. After the tragic fire, the now homeless club set up temporary accommodation in a local car-park. Dark, damp and depressing, the space was well-used but far from fit-for-purpose. Thanks to the collosal effects of the DIY SOS team, contactors and suppliers, the Dale Youth Boxing Club is now settling into state-of-the-art facilities. We are very pleased to have supplied a range of commercial ventilation kit to this important Big Build.

The new boxing gym includes a mezzanine level with a boxing ring, training and gym area, as well as changing rooms, showers and toilets. We supplied one of our largest packaged heat recovery systems, the XBC85 horizontal, to ventilate the gym and central areas. The XBC85’s built-in Ecosmart Classic controls will provide demand control ventilation, saving energy and recovering heat to keep energy costs low over the building’s lifetime. As a charity-run facility, that’s pretty important.

So why was a youth boxing club chosen for the DIY SOS treatment, among so many other worthy communith projects? Last night's episode brings it home beautifully. It's the trainers and everyday members of 'Dale Youth' that make the club such a special place. The kids and teenagers have benefited from much more than boxing training.

The inspirational coach, Mick Delaney, is seen as a second dad to many of his young members, offering them advice on life issues and teaching them valuable lessons on respect, grit and self-discipline. It has been a pleasure to play our part in helping create a great new facility for Mick, his members and the hundreds of future boxers that will no-doubt benefit.

The second episode of DIY SOS: Grenfell will air on 12th September, telling the story of the community centre build, and of the people in the community that were involved in the project and who will benefit from the new flexible-use space.

The community centre houses discrete counselling rooms for bereaved families, supported by charities including Child Bereavement UK. There are also two large halls and a kitchen, giving adaptable space to the groups that will use it.

The new facility will benefit from optimum indoor air quality with the installation of two wall-mounted MVHR units, MRXBOXAB-ECO2. Air quality has been further improved with two of our high-efficiency IAQ-BOX Carbon Filter systems, which remove up to 99.5% of harmful Nitrogen Dioxide. Building just beneath the Westway meant a high level of traffic pollution, but the combination of MVHR and carbon filtration is an effective mitigation method, described by presenter Nick Knowles as a ‘belt and braces’ approach. Occupants can enjoy a space that is healthy and promotes wellbeing, which is heartening.

The Value of Compassion

The community centre and boxing gym project is the most ambitious big build ever tackled by the DIY SOS team. The combined value of the donations in products, services and time totals £2 million. That’s an indication of the level of compassion and desire to help expressed by everyone involved.
As a company, we have enjoyed contributing fans to several DIY SOS big build projects, but the Grenfell Big Build has a special place in our hearts. We played a small part in a hugely significant and morally important project, and we hope that the spaces will be well-used by the community as it starts to rebuild itself.

Find out more about the DIY SOS: Grenfell build.