Air pollution is now recognised to be the greatest environmental threat to human health in the UK.

A major health risk, it is more harmful than passive smoking and, according to Public Health England, is responsible for as many deaths as alcohol. Reducing exposure to air pollution is now a major government initiative, but the challenge is vast.

Evidence from the Royal College of Physicians and the World Health Organisation states that as many as 40,000 deaths each year are the result of air pollution and poor indoor air quality, with long-term exposure linked to asthma, heart and lung disease, cancer, dementia, diabetes and stroke.

Exposure to high concentrations of pollutants is harmful to our health, and the effects are cumulative, causing damage at every stage of our lives. Elderly people and those with existing health conditions like asthma and heart disease are particularly at risk from poor air quality. Episodes of high air pollution are linked to spikes in hospital admissions with respiratory problems and cardiac arrests, and to increased mortality rates. Children are also vulnerable, developing long-life health problems like asthma as a result of early exposure to air pollution. An investigation into the death of a child in London due to asthma has, for the first time, explicitly named poor air quality as the main cause. Sadly, this landmark case is likely to be the first of many. Action to protect the most vulnerable from harmful pollutants, at home, at work, at school and when travelling, is needed now.

So what are the culprit gases and particles that are of most concern? The government has a statutory obligation to keep concentrations of some pollutants below a certain level. These are fine particulate matter (PM2.5), nitrogen dioxide (NO2 and NOX), non-methane Volatile Organic Compounds (NMVOCs), ammonia (NH3) and sulphur dioxide (SO2).

These pollutants come from many sources, including road traffic, industrial processes, agriculture and domestic fuel burning. Some of these pollutants react in the air, in sunlight and with each other to form other pollutants. Both NOX and VOCs react with other pollutants and in sunlight to form low level ozone. Ammonia converts to Particulate Matter after several days in the atmosphere, while sulphur dioxide combines with water to form acid rain.

Reactions between NOX, sulphur dioxide and ammonia form secondary PM. The process is fast, continuous and highly unstable. Add the influence of weather and you have a bigger problem. Day-to-day changes in weather have a great influence on air quality. High winds can transport PM and ammonia a long way from their original source, increasing exposure in other areas. In urban areas, air pollution levels are often highest on warm, still days when dispersion is limited and sunlight causes chemical reactions.

Road transport is the largest single source of nitrogen dioxide emissions and also produces Particulate Matter, VOCs, SO2 and ozone. People living near busy roads are at greatest risk of exposure to air pollution both as they travel outside and in their homes. In fact, levels of N02 can be as high inside the home as they are at the roadside in high pollution areas.

In a recent report by the World Health Organisation which has made headline news in the British press, it was highlighted that 37 of 43 air quality zones across the UK have failed to meet EU limits on N02. These regions will have streets or larger areas that are labelled Air Quality Management Areas or AQMAs for failing to meet air quality objectives set by government. There are currently 725 in England, 45 in Wales, 43 in Scotland and 42 in Northern Ireland, so the problem is sizable and widespread.

A Disparity Between New and Existing Homes

With what is now known about the health effects of air pollution, focus has turned to mitigation techniques to keep pollutants out of the home. Technology for air filtration in new build developments is making great strides, with highly-effective carbon filter products that work as part of a ducted Mechanical Ventilation with Heat Recovery (MVHR) system.

Nuaire launched its inline IAQ-BOX system which removes up to 99.5% of NO2 and up to 85% of PM2.5. Last year, we took this concept further with the design of the first carbon filter supply air valve which is highly effective yet easier and quicker to install and maintain.

Protection for occupants in newly built homes in high pollution areas already exists and in many cases, is becoming a planning condition. But when you consider there are 27 million existing homes in the UK, compared with 170,000 new homes built each year, the disparity is clear. The industry has been waiting for a solution for the millions of existing homes that are blighted by poor air quality.

As MVHR systems with carbon filtration require ducting through the property, they are highly intrusive to install in existing homes. Many existing properties are ventilated using intermittent extract fans, which are not effective at preventing the ingress of pollutants or their removal

With growing concern over poor indoor air quality and air pollution, some homeowners are taking steps to monitor and control the air in their homes using apps and consumer air purifiers. This can lead to a false sense of security as the removal of gases and particulates from the air is a complex process. It requires mechanical ventilation and carbon filtration to treat the air throughout the home, and control the pollutants generated inside the home.

£20 billion is the estimated cost of air pollution in the UK. Reducing exposure to pollutants whilst at home can save lives and improve the quality of life. We spend an average of 16 hours a day at home, and often the most vulnerable members of our society, babies and young children and the elderly, spend substantially more time in the home.

With the right technology, the control of pollutants in existing homes is now achievable. While we wait for a long-term solution to air pollution, products like the Noxmaster should help reduce diseases like asthma, heart disease and cancer, and increase life expectancy for thousands of people. 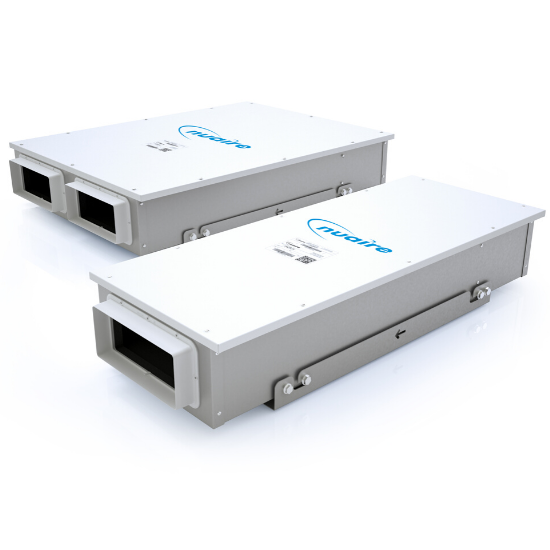